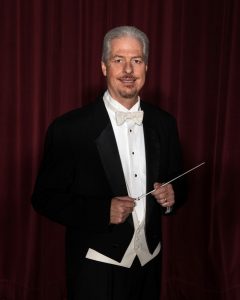 Randy Greenwell has been an Educational Support Manager with Conn-Selmer, (an American Musical Instrument Manufacturer) since January 2017. He is the former Director of Bands and Performing Arts Department Chair, of the nationally recognized Lawrence Central High School Performing Arts Department, Indianapolis, Indiana. Randy’s tenure as Music Director with the Greenwood Community Band began in 2018.

Randy was named a “Distinguished Citizen of Indianapolis” in 2001. He was inducted into the “Music for All/Bands of America Hall of Fame” as well as the “Phi Beta Mu Hall of Fame” in 2018. He actively judges for DCI, WGI, and Bands of America, guest conducts honor bands, and does clinics on a variety of music education topics across the country. Randy continues to serve as music arranger and program coordinator for several competitive bands around the country and is part of the clinician team for the Conn-Selmer Institute Marching Arts Workshop.

In 2019, The Greenwood Community Band, for which he serves a Music Director, performed at the opening session of the Conn-Selmer Institute. Randy is still an active trumpet player in Indianapolis, performing exclusively on Vincent Bach Stradivarius instruments, manufactured by Conn-Selmer.

Welcome to our opening concert of the 2022 season. We are excited to present a diverse program today with a variety of music. We have seen audiences grow over the past few years and are happy to have you as part of our musical family. Please be sure to keep spreading the word, bringing friends and enjoying our shows. We will be moving to the Amphitheater after this concert for great evenings of fun. Saturday May 28th is going to be a Dixieland theme and will be a lively and energetic concert.

We would like to thank the City of Greenwood, through the Mayor’s office, City Council, Parks Department, and School System for the great support that they give us. They all realize the importance of arts in the community and help make what we do possible. If you enjoy what you experience drop them a note to let them know.

Thanks again for being here with us and enjoy the concert.